Today, January 11, 2017, the Cree Board of Health and Social Services of James Bay was part of a “tabletop exercise (ttx)" in Chisasibi to test the community’s ability to respond to emergencies and disasters. The exercise, called Nimischiu Waawaashtaapiyiu, was coordinated by the Cree Nation of Chisasibi. Chisasibi is a 5,000 member Eeyou community on the James Bay coast, at the mouth of the La Grande River, which is downstream from some of Quebec’s biggest hydroelectric infrastructure. It is home to the 29-bed Chisasibi Hospital, which provides the only emergency department for hundreds of square kilometers of Boreal forest and coastline. When disaster strikes in northern communities like Chisasibi, every local organization is called into service and uses the community’s Emergency Measures Plan as its template for action. 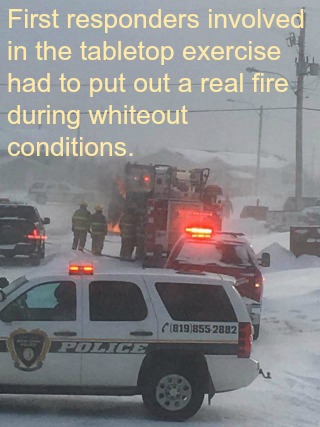 The tabletop exercise was a full-day simulation held at the local Fire Hall, and based on a scenario of a major forest fire requiring partial evacuation of the community (this is a very realistic scenario since large wildfires are a feature of the northern forest surrounding Chisasibi).

During the full day exercise, the participants set up a realistic emergency coordination centre (ECC) and Control Room and simulated an evolving scenario. They simulated all communications from the field, from first responders, regional or provincial organizations which reach the ECC.  A Shelter for Disaster Victims was set up according to the protocols outlined in the Emergency Measures Plan. An operation log was kept where every action was recorded. The day’s program even includesd a simulated press briefing. At the end of the exercise there was a full debriefing and evaluation.

Exercises such as this bring all the major partners together to ensure that if and when a real disaster strikes, the community partners are ready, plans are up to date, and everyone knows their role in protecting the health and safety of the population.