Children born with Cree Encephalitis (CE) are weak from birth and usually die in infancy or early childhood; those with Cree Leukoencephalopathy (CLE) usually develop symptoms after their first fever, also dying in infancy. These two genetic diseases, which attack the nervous system, are among the leading causes of death of Cree infants. Since 2006, the Cree Health Board, working with the Eeyou Awash Foundation (EAF), has operated a screening program to identify carriers of the genes for CLE and CE. If both parents carry the gene for CLE or CE, there is a one in four chance that their infant will have the condition; among the Cree, carrier rates are estimated to be two or three people out of twenty, meaning that about one in 300 births will be affected.

However, because the genes for these conditions are recessive, people who carry only one copy of the gene are not affected by it. Neither, however, would they know they carried the gene until they had an infant with the affliction – unless, that is, they participate in a screening program. Thus far, over 400 Cree from Eeyou Istchee have been genetically screened to determine whether or not they are carriers.

In January 2012, Jessica Le Clerc-Blain set out to determine just what those people who had been through the program thought of the process. At the time she was graduate student working with Dr. Anne-Marie Laberge, a medical geneticist based at Ste-Justine Hospital and an assistant professor of clinical pediatrics at the Université de Montréal; the project served as her master’s thesis research. Le Clerc-Blain interviewed eighteen individuals in two communities. “The main objective was to learn about their experience with the carrier screening program,” she explains. She asked participants about what they thought of the program and about their responses to learning their results, as well as what they thought of the program’s importance for the community.

After the interviews were analyzed, Le Clerc-Blain isolated four main findings. “First of all, everyone seems to be familiar with CLE and CE, perhaps through knowing someone who has had a child with the condition or having had such a child themselves, or even hearing about these conditions on radio and TV.”

A second significant finding was that half of the participants did not discuss the results of their screening with other family members, including parents, brothers, sisters, and cousins. “Since genetic characteristics are shared in families, if I’m a carrier my brother might be as well,” says Le Clerc-Blain. As her former graduate supervisor Laberge explains, “For many genetic diseases we rely on cascade screening: that is, if a family has an individual who is affected, we follow up by screening the family, including siblings and cousins.” Such “cascading” can help identify carriers more easily; Le Clerc-Blain’s discovery that people are not always telling family members the outcome of their screening tests has prompted the Eeyou Awash Foundation to consider redesigning educational materials to emphasize the advantages of sharing such results. 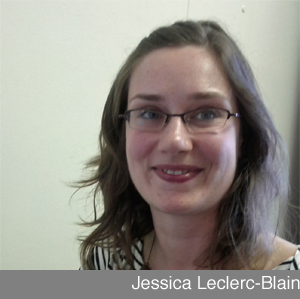 A third common response was that participants were interested in prenatal diagnosis and appreciated learning about these options in the counseling session held before their genetic screening took place. All participants felt it would be helpful to know ahead of time if a fetus was going to be affected with CE or CLE, although there was no consistent response for what people would do with this information. Participants were also interested in reproductive technologies such as in vitro fertilization, where the embryo could be tested for CLE/CE before being implanted into the mother’s uterus. “People asked this technology without me bringing it up,” says Le Clerc-Blain.

The final point: “We learned that people are quite satisfied with the screening program,” she says. “They would like it to be more visible, though – perhaps through more radio publicity or by presentations at general assemblies.”

Le Clerc-Blain’s study will form the first stage of a larger project, in which she will again work with Laberge to analyze data collected on rates of carriers and of CLE/CE and the use of prenatal screening, and will assess more detailed data on people’s knowledge of and satisfaction with the program. This three-year project, just beginning this summer, is funded by the Canadian Institutes of Health Research.