On April 20, 2018 the CBHSSJB launched a Smartphone App of medical terms in East Cree dialects of Southern Inland, Southern Coastal and Northern, available for download on App Store and Google Play.

The app was created by the Public Health Language Working Group, comprised of Cree language specialists, linguists, teachers and broadcasters from the region and within Canada, and funded by the CBHSSJB, Social Sciences and Humanities Research Council, Carleton University and the Canadian Partnership Against Cancer.

The Cree Medical App is a free tool designed to improve the cultural safety of Cree patients, especially those undergoing cancer care. It is a glossary and translation dictionary intended to give a fun and educational experience to patients and their families, and to help healthcare workers and service providers communicate with their clients in Cree.

The app was originally created as part of the federally-funded Cancer Project of Regions 17 and 18, and is the culmination of many years of work by linguists, teachers, specialists and consultants from Eeyou Istchee and across Canada. It is available for download free of charge on iOS and Android. 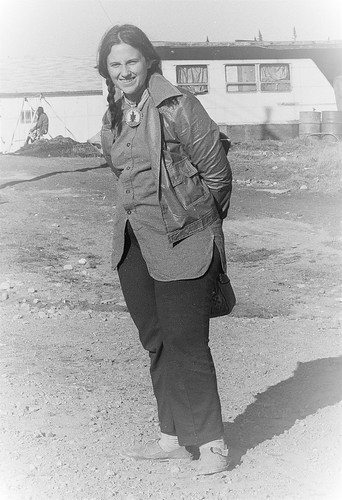 In officially launching the app at this time, the Cree Board of Health and Social Services of James Bay wishes to honour Ann Marie Awashish not only for her leadership in developing the app but also for her lifelong contribution to the well-being of her adopted community. The East Cree Medical app is the latest example of her exceptional ability to apply leadership and coordination skills to move from a vision to a concrete project for the betterment of the community.

Ann Marie played a crucial role in organising the Cree hunters to oppose the James Bay hydro developments, which later led to the James Bay and Northern Quebec Agreement. Coming to Eeyou Istchee as a young woman, she has been an active champion of Cree self-determination, and an advocate and protector of Cree culture, language and traditions.

In the early 1970s, she founded and became the Executive Director of Québec’s first Friendship Centre in Chibougamau. She was later elected Councillor for the Mistassini Band. Twenty years ago, she successfully negotiated financing for Mistissini Chisheinuukamikw, the Mistissini Elders’ Home, of which she is still a member of the Board.

More recently, coming to work in the Public Health Department of the CBHSSJB, she carried out 100 interviews with cancer survivors and their families in Eeyou Istchee and Nunavik and the ensuing report was used to obtain funding for the Cancer Project. Her work then focused on improving services for patients. Regrettably, while working on this project, she was herself diagnosed with cancer, but nevertheless continued to provide valuable contributions when health permitted. Ann Marie is now in palliative care at Chibougamau Regional Hospital.