Cree Health Board Participates in Waskaganish Search and Recovery Effort

The Cree Health Board extends its deep sympathy to the familes of four Waskaganish hunters who went missing on the Rupert river. Two of the men are known to have drowned, and two are still missing. This tragedy touches every member of the Waskaganish community and many others throughout Eeyou Istchee and beyond.

CBHSSJB Coordinator of Prehospital Services and Emergency Measures Jason Coonishish returned to his home community of Mistissini on November 5, after 13 days on the job as part of the search and recovery effort. He shared over 60 pictures documenting this major operation. (click on the image below to see the pictures in slide show mode). 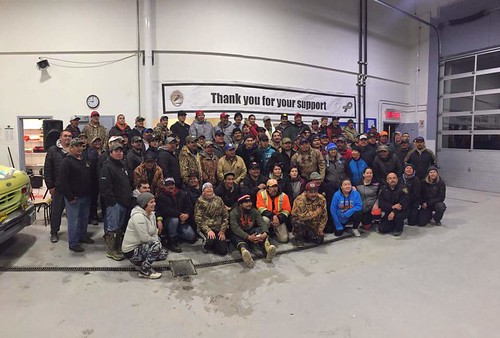 Patrick Salt, 48; Matthew Diamond, 43; Kenneth Salt, 67; and Gabriel Shecapio, 30, were doing some fall goose hunting and left the community October 17. It is presumed that the four men were in a boating accident. The body of Patrick Salt was recovered on October 20, and the body of Matthew Diamond was found on October 28. Gabriel Shecapio and Kenneth Salt have not yet been found.

The Search and Rescue/Recovery (SAR) was coordinated by the Cree Nation of Waskaganish and involved contributions of searchers and equipment from every other Cree Nation in Eeyou Istchee, volunteers from the Mushkegowuk First Nations in Ontario, Mohawk land search experts from Kahnawà:ke, and provincial agencies such as the Sécurité du Québec, Sécurité civile and the Association Québécoise des bénévoles en recherche et sauvetage (AQBRS). Waskaganish elders provided meals of traditional food to the SAR team and guided the search with their lifetime knowledge of the land and water.

The SAR effort was made more difficult by high winds and freezing rain, swift currents, waves and poor visibility. At times, the marine search had to be called off and helicopters were unable to fly. Nevertheless, the team of 100+ volunteers continued to search. Finally, on Sunday November 5, with weather warnings being announced in many areas of Quebec, the SAR was scaled back so that First Responders from other communities could return to their duties at home.

On day two of the Search and Rescue, the Cree Health Board Maanuuhiikuu Department (regional mental health services) brought counsellor Joseph Jolly and Psychologist Louise Dessertine to Waskaganish to provide grief counselling to the bereaved families and to the search and recovery team, who were under extreme stress. Dr. Jolly was born in Waskaganish and grew up in Moose Factory. He and his wife Sheila Jolly have both written books about grief.

Jason Coonishish, on the ground since day one, led the effort to obtain the services of a canine search team consisting of four specially trained dogs and their handlers, to help search for Gabriel Shecapio and Kenneth Salt. The dogs were provided by the AQBRS, a Quebec-wide volunteer search and rescue association. The canine team arrived on the Cree Health Board medical charter flight operated by Air Creebec.

Throughout the search and recovery effort there were regular public debriefings and daily video updates from Ryan Erless, Director of Community Services for the Cree Nation of Waskaganish. These updates can be found on the Waskaganish Facebook page: https://www.facebook.com/waskaganishfirstnation

The Cree Health Board is an important partner in all search and rescue or search and recovery operations in Eeyou Istchee. The role of the Cree Health Board, includes, but is not limited to, emergency medical assistance, ambulance services, medical evacuation, and access to psychologists and crisis counsellors. As coordinator of Prehospital Services and Emergency Measures for the CBHSSJB, Jason Coonishish helps the local community access resources, equipment and expertise from the Cree Health Board as part of an overall effort coordinated by the local community under the leadership of Chief and Council.